Legacy of a man

UNIDEL traces its history to the early 1900s as Rasiklal Maneklal & Company, a leading stock broking and investments firm of its time. The original broking business has since morphed into RM Capital, serving as UNIDEL’s Family Investment Office providing investment management, asset allocation and a comprehensive set of back-office and middle-office services. 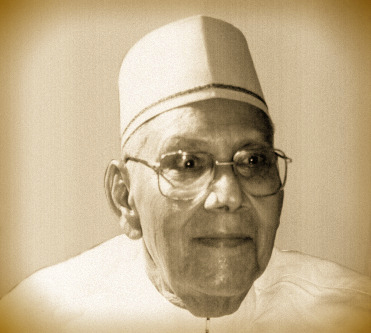 Rasiklal Maneklal was born in 1914 to Maneklal Jethabhai and Subhadra Ben. He was brought up and educated in both Bombay and Ahmedabad. He received his BA in Economics from Gujarat College, Ahmedabad. Having lost his father at an early age and as the only son and breadwinner, young Rasiklal moved to Bombay in search of work. Rasiklal Maneklal joined the fledgling Bombay Stock Exchange that had just recently occupied its new building standing on the current premises of Dalal Street. Rasiklal Maneklal & Co was the stock broking firm that he founded. Alongside building a successful broking business, Rasiklal Maneklal invested in what he thought were “blue chip” companies, for the long term. His investments in corporate India were wise and have stood the test of time even after four generations.

Rasiklal Maneklal was well known for his astute business sense and his integrity and served on the Governing Board of the Bombay Stock Exchange for several decades. He was invited to be a Board Director of several large corporate houses; Century Mills, Birla Jute, Grasim, Arvind Mills, and Futura Polymers. He served on these boards with a sense of responsibility and morality.

In the 1990s, after his retirement, and long after his company had stopped actively trading on the exchange, Rasiklal Maneklal continued to enjoy attending his office and giving counsel to his fellow Members and arbitrating disputes on the BSE.

Rasiklal Maneklal’s ethics of hard work and fair play continued at home where he made sure that his three children learnt the value of money and were educated to the best of their own abilities and desires. As the family expanded, Rasiklal Maneklal took a keen interest in his grandchildren’s as well as his great-grandchildren’s education as well as financial security.

Whether it was at work or home, he built an atmosphere of trust and led by example. Rasiklal Maneklal was a meticulous man who did not believe in shortcuts. He had faith in the power of hard work. His most important legacy to his inheritors is a strong set of ethics and a robust value system. 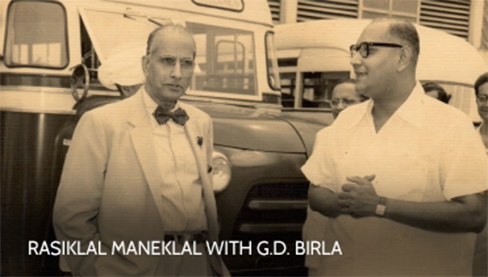 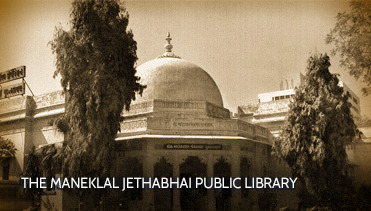 In 1930, Mahatma Gandhi launched his protest against the British tax on salt by undertaking his famous Dandi march to the sea to defy the British tax on salt. As he left the Sabarmati Ashram to begin the march, Gandhi vowed he would not return to live in Ahmedabad until India achieved its independence. The British retaliation to the salt tax defiance and his own vow meant Gandhiji wouldn’t be able to return to Ahmedabad soon. Concerned about his prized collection of ten thousand books left behind at his ashram, Gandhiji offered the books to the city of Ahmedabad with the hope of forming a public library. It was Rasiklal Maneklal who stepped forward to make donations and build this public library in memory of his late father Sheth Maneklal Jethabhai.

Gandhiji himself came to lay the foundation stone on 21 September 1933, and on 18 April 1938, Sardar Vallabhbhai Patel, his fellow freedom fighter, conducted the opening ceremonies.

Rasiklal’s mother Subhadraben Maneklal, wife of Sheth Maneklal Jethabhai made an additional donation to construct an expanded reading room, which still serves as a focal area of the library. The city of Ahmedabad assumed responsibility for the library and named it the Maneklal Jethabhai Library. 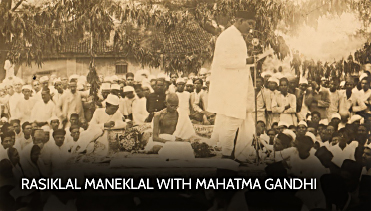 The collection now has over four hundred thousand volumes and eight hundred current serial subscriptions, making it one of the largest public libraries in India. Current serials and English and Gujarati books, as might be expected, are the most intensively used portions of the library. However, given the diverse population of Ahmedabad, the M. J. Library (as it is commonly called) does collect books in most of the languages of India. It has also introduced innovative library programs and the construction of an auditorium has allowed it to sponsor many public lectures and events. The orientation toward literacy and children sparked the development not only of a children’s room but also a special children’s museum and a toys section.

Rasiklal Maneklal also set up the Nirmala Rasiklal Charity Trust to continue his philanthropic activities from Bombay. Even today, the trust, which is administered by family members, offers donations for education as well as basic healthcare.